Interested in working for Lightning this year?
Please click on the link at the bottom of the left-hand menu.

The 2001 NESCAC Coach of the Year is a native of Liverpool, England. Coach Ralph Ferrigno has been on the American soccer scene for over 15 years. At Tufts University he has renovated an ailing program into a regional & national powerhouse. Prior to Tufts he had gained collegiate experience at Division I & II men and women. A force on the youth soccer scene Coach Ferrigno’s teams have claimed 5 state titles & have competed successfully at prestigious tournaments such as the Dallas Cup, Surf Cup & Capital Cup. A veteran of over 10 years with the Olympic Development Program, a licensed coach in the USA, England & Wales, and founder of the Lightning Soccer program in 1986, Coach Ferrigno is one of the most versatile soccer coaches in the country. Outside of Tufts he currently coaches with the u14 SF Vikings boys team in the MAPLE league & is a veteran of 20 years plus on the ODP program. Ferrigno’s 2006 ODP squad were Region 1 champions and qualified for the National Championship Final Four in Dallas, TX. 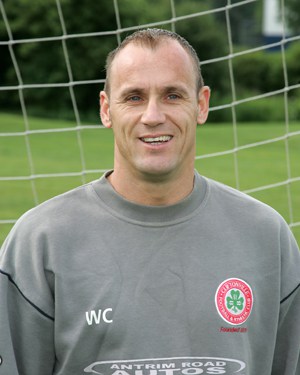 Bill hails from Belfast, Northern Ireland. A goalkeeper who played professionally with Glentoran & latterly with Larne Town, Bill is a licensed coach with the Northern Ireland FA who will be enjoying his 10th season with our camps. Bill took Larne u19’s to the Irish Youth Cup Championship and in the past few years has started scouting for English giants, Manchester United FC. Presently he coaches with Cliftonville FC u16 Boys. Bill is responsible for drawing up the curriculum at all our sites and assigning our staff. 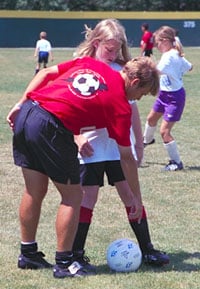 Matt grew up in Sheffield, England. He played as a junior with Chesterfield FC in the English third division & latterly qualified as a teacher with Manchester University. Matt is licensed through the English FA, he formerly coached with the Sheffield Wednesday Academy & with Doncaster Boys u15’s. Recently he made a move to Nottingham Forest FC where he coaches their u14 squad. Matt assists Bill in his duties & is responsible for administrative issues on site at all our camps. 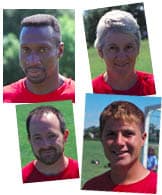 There is a qualified trainer at each camp to take care of all the bumps & bruises !! Trainers in past years have included NICK MITROPOLOUS of Tufts University, the head trainer of the Tufts Soccer team, DAN MORGAN of Endicott College, and BRIAN BELLINGER of Silver Lake HS.

PAST INTERNATIONAL STAFF HAS INCLUDED ….

PAST HIGH SCHOOL COACHES HAVE INCLUDED ….

In the past we have been able to bring in college coaches if they been available. Over the years schools represented have included Dartmouth, Harvard, Wheaton, Curry, Daniel Webster, Hobart, Clark, Trinity, Albany, Boston College, Providence College, Lock Haven, Gordon, Wellesley, Hamlin & Penn State. There are always a good number of Tufts assistants in evidence at most of our sites. This includes present Tufts assistants ROY DOW & KENNY FINN.

Current college platers are employed as counsellors. They serve as assistant coaches as we believe they are excellent role-models & demonstrators for our campers. Numerous colleges have been represented through the years but with the majority attending NESCAC, Ivy or Boston-area schools. We no longer offer a CIT program for high school age counsellors.